When word came yesterday morning that Marco had released his new iPhone podcast client, Overcast, I downloaded it immediately. I even paid the $5 to unlock all of the features, if only to show my support for him and his work. So far, there’s a lot to like. But, as a podcast listener with over 50 show subscriptions, there are a few things missing that will keep me from using it for all of my podcasts. 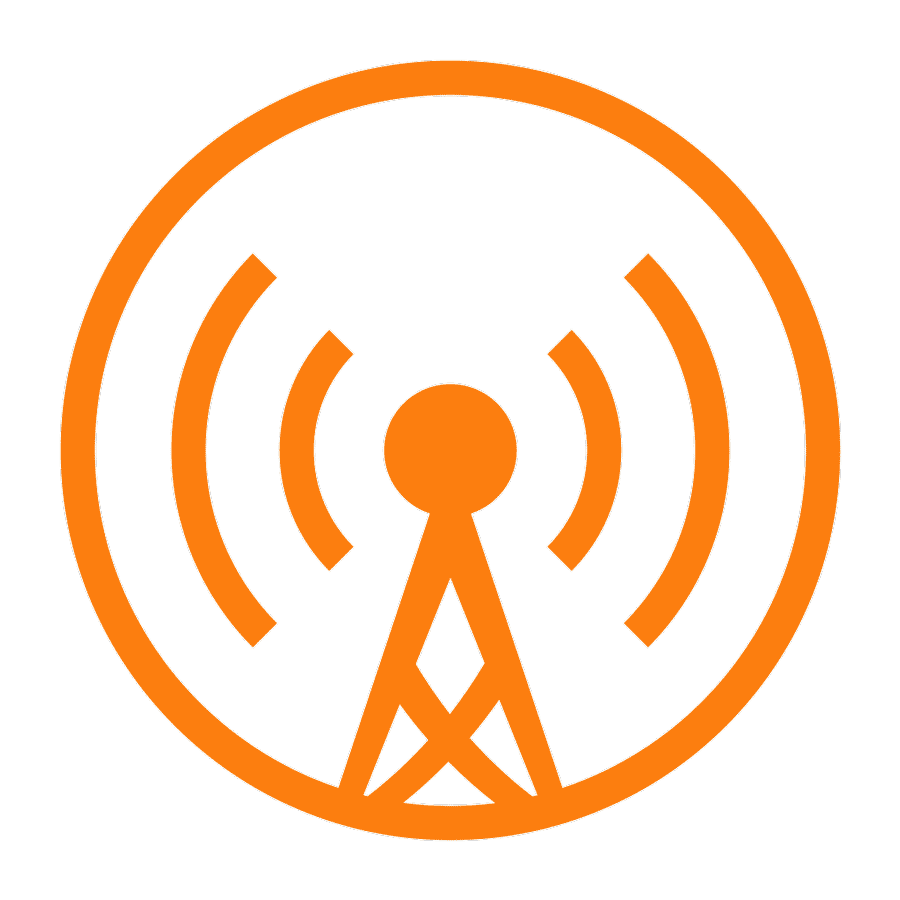 For background, I first used Instacast on my iPhone then switched to Downcast at the end of 2012. I’ve been overwhelmingly satisfied with it since then.

Let me run through some of Overcast’s features, then dig into the changes I’d like to see that would make this my perfect podcast app.

Overcast has a lot of features for a 1.0 release, especially when you compare it to other podcast clients that have been in development for years. Marco loves podcasts, and you can tell by the nice touches he has put into his app.

The Overcast interface has some nice touches. The Now Playing screen shows a live graphic equalizer over the show artwork. 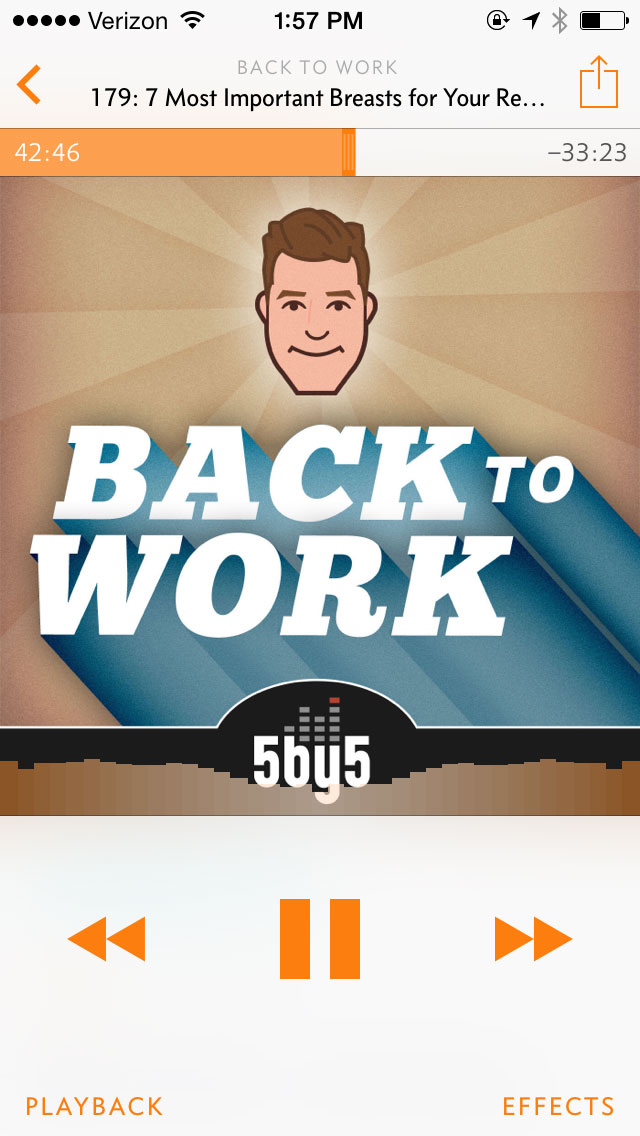 Scrolling down on the artwork will shrink it and show you the show notes screen, which is easy to read and allows you to star the episode for use in recommendations. 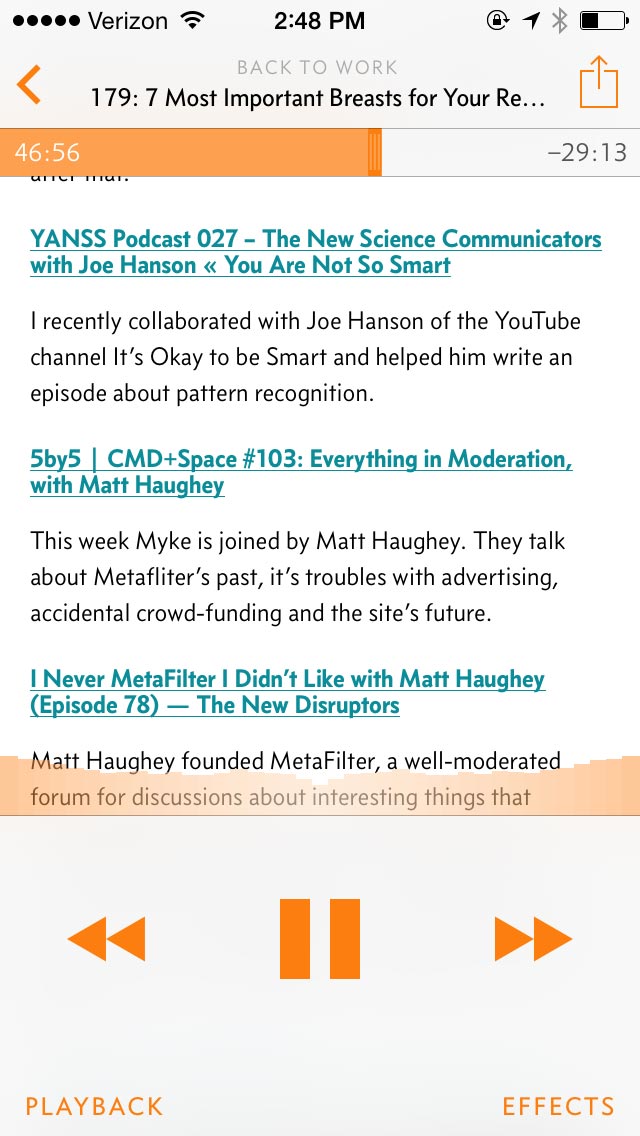 I’ve ended up listening to most of my podcasts faster than normal (1x) speed. Most are set to playback at 1.5x in Downcast, while some that I listen to for education/content more than entertainment are set to 2x speed1. Overcast offers nine different playback speed options, ranging from slower than 1x (about 0.8x) to faster than 2x (2.3x-ish).

Overcast’s Smart Speed feature can work by itself or in addition to faster playback speed settings. It works by intelligently shortening the silences in conversations. The time savings depends on the episode, but you might cut the playing time by around 10% even when listening at normal 1x speed. 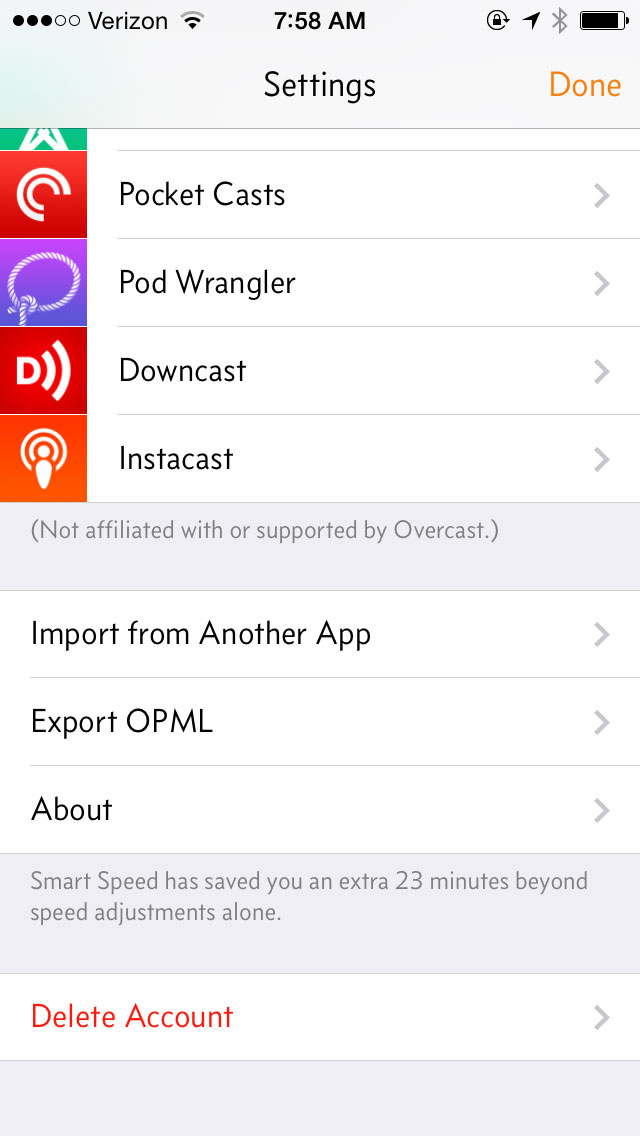 Voice Boost is a special EQ setting that makes conversations louder. This setting can be changed per podcast, and is helpful for shows that aren’t produced and edited at a “professional” level.

Upon opening it for the first time, Overcast asks you to create an account. This allows you to use the server-based features Marco has built for the app. The biggest of those features is that the servers do all of the checking for new episodes, and sends push notifications to the Overcast app when updates are available. This isn’t unique in itself2, but it’s new to me.

The server component also acts as a backup and sync service. So if/when I get a new phone, everything should appear exactly as it was on my old phone as soon as I download Overcast and sign into my account.

If you navigate to the Add Podcast screen, you’re presented with a few different options to find new shows. There’s a search box if you know what you’re looking for, and a listing of categories that each currently each suggest between 5 and 10 different podcasts. I’m not sure if those are hand picked, or if they’re based on popularity, though. 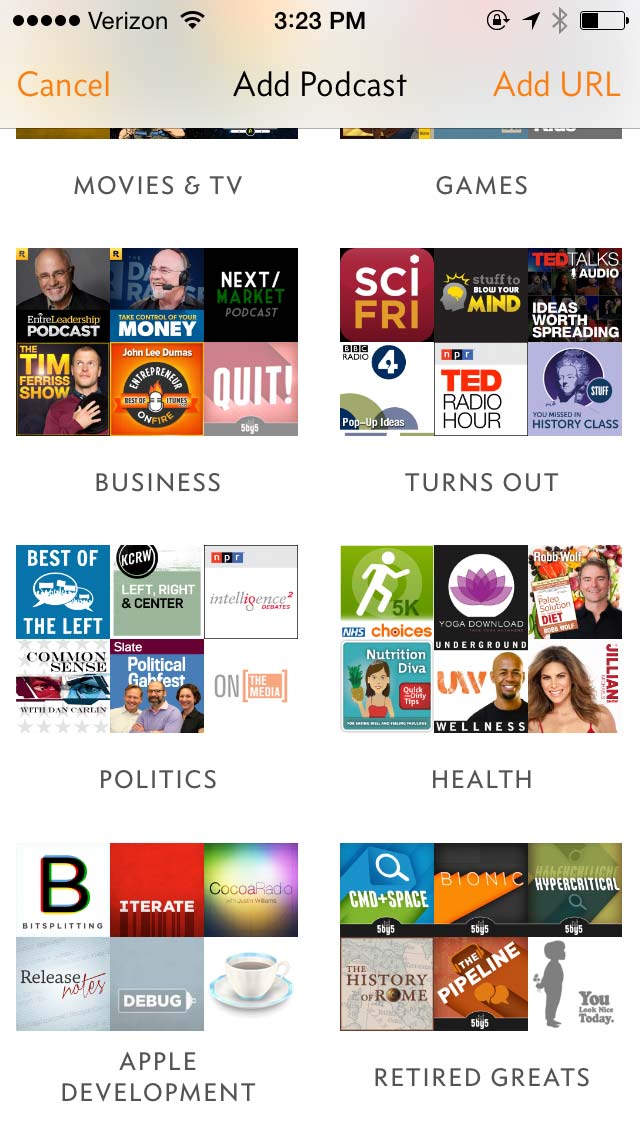 Another option on that screen is to sign into your Twitter account and receive recommendations from people you follow there. It splits the recommendations into episodes (you can give them stars to recommend them) and podcasts. 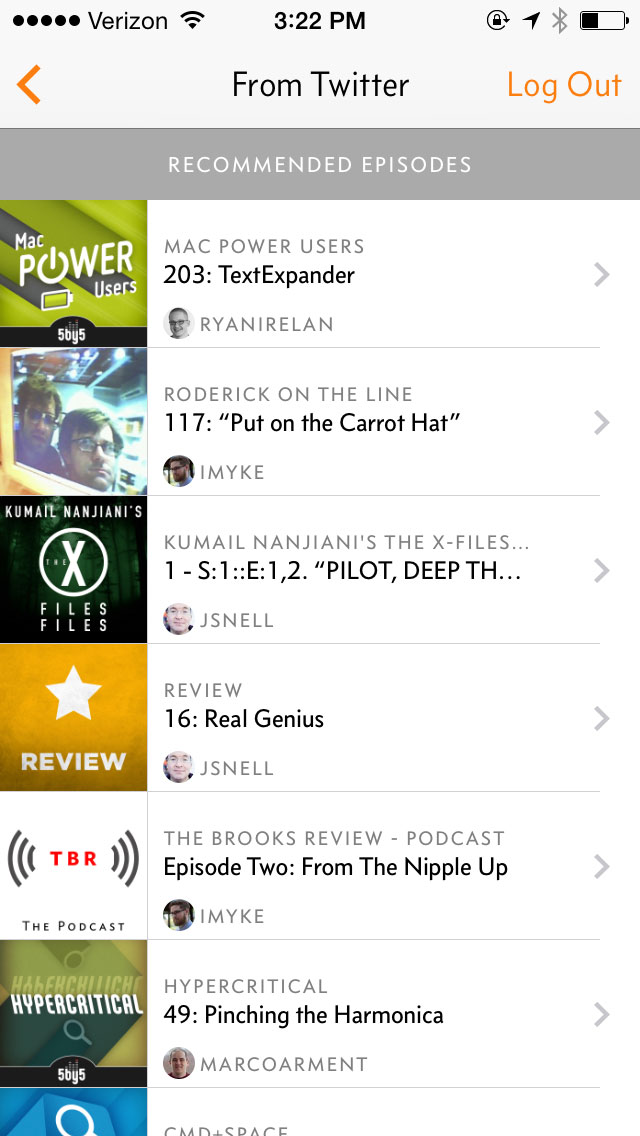 I have no doubt Marco already has a list of fixes and improvements he’s looking to add to 1.x releases of Overcast. Here’s the list of things I’d like to see, as someone who listens to dozens of shows.

Unplayed episodes that are also not downloaded

This is the one feature I need to have before I can make Overcast my one and only podcast app. In version 1.0, if an episode is listed as unplayed, it also means it’s downloaded. That’s probably OK for most people, and it’s also OK for most of my podcasts where I listen to the latest episode as it arrives.

The problem comes from podcasts where I have many unplayed episodes. According to my Downcast statistics, it counts 643 episodes. Of those, I have 79 downloaded, which are using 2.6 GB of space.

Downcast offers the ability to stream episodes instead of downloading them. I rarely stream, but I do have a number of podcasts set to mark new episodes for streaming instead of download. This adds them to my unplayed list without having to download it (and use up storage on my phone). I can later download the episode when I’m ready to listen to it.

Thankfully, it looks like this is going to be addressed sometime in the near future:

I’m hoping this will bring Overcast up to parity with Downcast in this regard. In the mean time, I’ll have to keep using Downcasts to manage podcasts with a old episodes.

I have several podcasts I’m listening to for educational/professional development content. Some of these have dozens of old episodes that go back years. I’d like to listen to them all, and I’d like to do it in the order they were released.

Ideally, what I’d like to do is create a playlist that contains the oldest unplayed episodes of a selected list of podcasts. Then, when I listen to an episode, it’s marked as played, and the next oldest episode is automatically downloaded for that show. That way, the playlist always contains the oldest unplayed episode for those shows I’ve selected. Or, this could be done at as a podcast setting instead of a playlist one.

I haven’t been able to find a podcast app that offers that as a playlist feature or as a per-show setting. The best example of a similar implementation I can think of is how iTunes handles syncing TV shows. There are a number of sync options, including the ability to sync the 1, 3, 5, or 10 oldest unwatched episodes. So, for example, if you just watched LOST S01E03, the next time you sync it’ll make S01E04 available.

Overcast already gives you the ability to download single podcast episodes from the directory without having to subscribe to the entire show. This is awesome. I’d like to see some additional features here, and maybe they’ll be possible with the release of iOS 8 this fall.

I currently use HuffDuffer to create a custom podcast feed for single episodes I hear about from Twitter or blogs. Between the iOS app and the Overcast web interface, I there are multiple opportunities to save these episodes for later listening.

Looking forward to the future of Overcast

Overcast is great for a 1.0 release, and already surpasses its competitors in many ways. I think it has the potential to be the best iPhone podcast app, and I can’t wait to see what Marco has in store for future updates.

3 replies on “Overcast feedback from a podcast power user”

I arrived here late. But agree with your views. The things I like are really the features that only overcast has. SmartSpeed is brilliant, voice-boost does its job. Overall experience is great.

However I struggle with the downloading experience of the app, few of the issues are referred to by you too. I write them in details here. http://amitgawande.com/i-want-use-overcast-but-cant/

I’ve only had Overcast a few days, but I’m already loving the audio features. My greatest frustration is that I can’t also use those features with audiobooks. It’d be great if the app could accept an M4b audiobook, perhaps by placing it in Dropbox folder and importing it from there. It could be treated as a podcast.

I already know that importing from Dropbox works. That’s how I got my OPML podcast list from iTunes in my Mac into Overcast. I placed it in a Dropbox folder. Then I opened the Dropbox app on my iPhone and one of the options was to Open in Overcast.

Even better would be if Overcast could open files in Dropbox directly.

That’s a really good idea. I think I remember Marco saying that he had the ability to load and play arbitrary files enabled in some of his development versions, but obviously he hasn’t made that available to the public (yet).

My workaround for this is to drop an mp3 into dropbox, grab the public link for it, then add it to my Huffduffer feed, which Overcast visits an few minutes later and then grabs the file. Not a great solution, but it gets the job done.