Amazon announced and released the Amazon Fire TV set top box yesterday. Its technical specs looks impressive, and it’s priced right, but there’s not enough of difference to make me want to switch from our Roku 3 yet. It’s definitely worth a look if you don’t have a streaming box, though.

Casey and I did a complete overhaul of our family room entertainment system as our Christmas gift to ourselves a few months ago, replacing our old (and heavy) Panasonic CRT TV with a Vizio LED. While I had everything taken apart and unplugged, I took the opportunity to swap out our three year old Roku XDS for the newer and more powerful Roku 3. 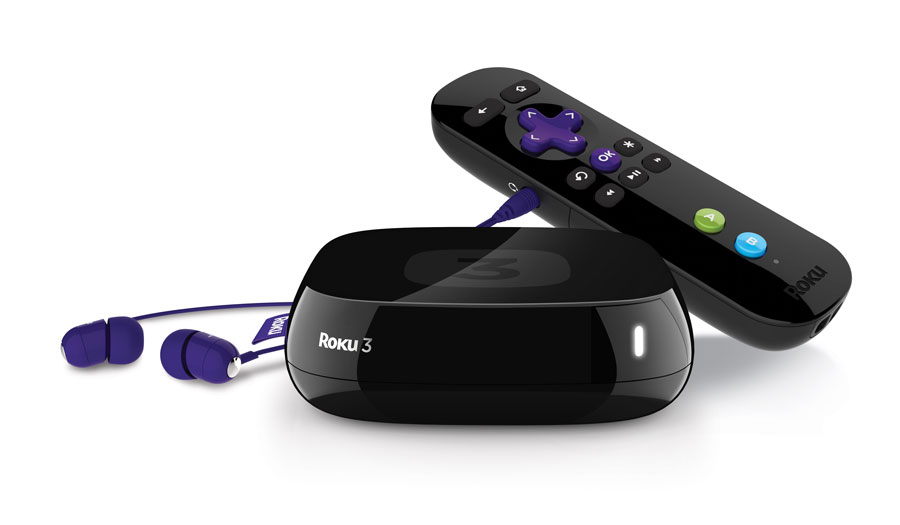 To our kids, the new user interface of the Roku 3 is the new TV. Apps are easier to navigate, the larger photos and graphics are nicer to look at, and things just work faster and smoother than the lower powered XDS (which was doomed to run an older version of the Roku software)1.

But the most significant change for us was when we introduced Plex to our setup. This great channel works with a media server application running on our Mac Mini, where it catalogs the movies and tv shows we have stored there and allow us to stream them to the Roku. After resolving some issues initially setting up the media server, it’s been working largely problem free2.

I say all of that to get to this point – The Amazon Fire TV looks great. It has a lot more computing power than our Roku 3 (no doubt necessary to run what are essentially Android apps) and offers a somewhat gimmicky voice search feature3, but it’s not compelling enough of an upgrade right now to make me want to ditch the Roku.

If you look at Amazon’s own comparison chart, The Fire TV and Roku 3 are near parity on features. The Fire TV offers Android games, while the Roku 3 has channels for more popular services (notably, HBO Go and Spotify). Otherwise, they’re nearly identical. 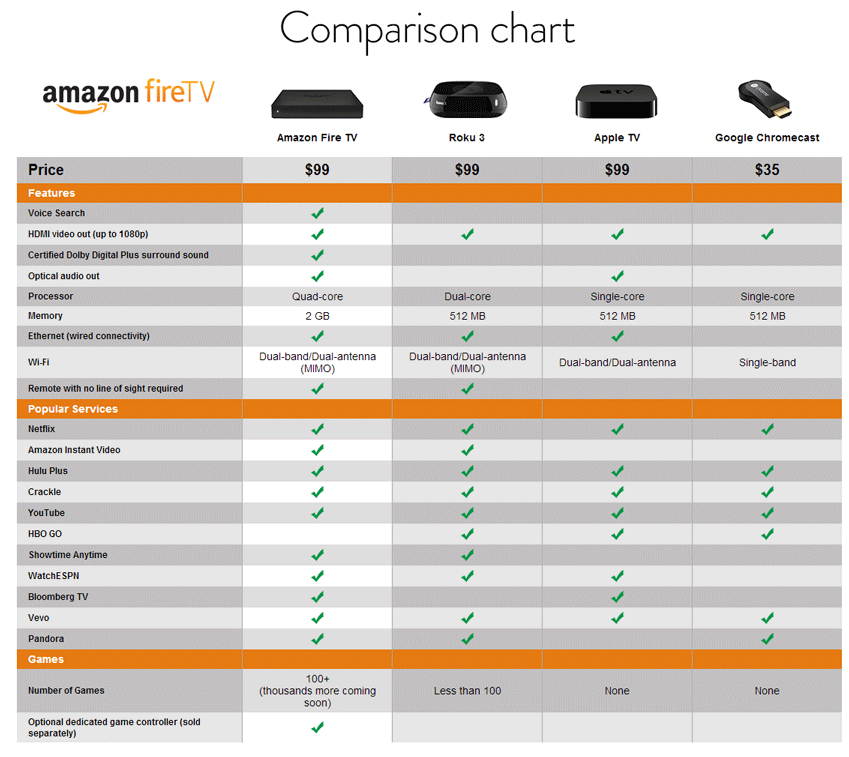 Sidenote: Roku may boast of “over 1000 more channels than Amazon Fire TV, Apple TV or Chromecast” on its homepage, but practically speaking, most of them are garbage4. I can’t think of any we’d miss if we switched to the Fire TV5.

I will say that both the Amazon Instant Video and Plex channels look much better for the Fire TV. Their interfaces look very modern and image-based compared to the Roku versions which are…functional.

Maybe you noticed that the Apple TV was absent from my discussion above. In its current form, the Apple TV is an also-ran. It’s been over two years since Apple released a major update for this self proclaimed “hobby” product, and it shows. The hardware is outdated and its lacking in content and features.

The ability to stream content from a Mac to the TV is the only Apple TV feature that made me consider buying one. But this is a problem now solved by Plex, and apparently well enough that people like Merlin Mann and Dan Benjamin, who already have Apple TVs, prefer using Plex on a Roku 3.

As I’m finishing this post, I started listening to this week’s episode of the Accidental Tech Podcast, and as usual, John Siracusa nails the issue. Quoting him starting at minute 27:

I think the whole reason this box [the Fire TV] and the Roku exist – it’s Apple’s fault for not making Apple TV better fast enough…[but] for these hobby products, Apple TV has stagnated like crazy. It’s ancient hardware, and the software features – it’s worst then iOS 1.0…There’s nothing that Amazon and Roku have done that Apple couldn’t have done years ago. They just didn’t.

Maybe (hopefully) this will change in the near future, and we’ll see the Apple video device that makes Apple TV a first class competitor in the “living room TV puck” product category. Until then, we have two great options in Roku and Fire TV.