Yesterday morning I broke away from my work and turned to Twitter right around when the Supreme Court was supposed to announce their decision in the Affordable Care Act case. I, like everyone else, was surprised at the ruling, and followed-up with some instant analysis from my Twitter timeline and on MPR.

Shortly after, saw a tweet1 about people threatening to move to Canada because of the Supreme Court outcome (BuzzFeed has a nice collection of examples). I loved the irony of these comments and remembered that I had earlier read somewhere that the U.S. was alone among industrialized countries in not offering universal healthcare. I did some research and found that it was, in fact, true. This led me to post the following tweet: 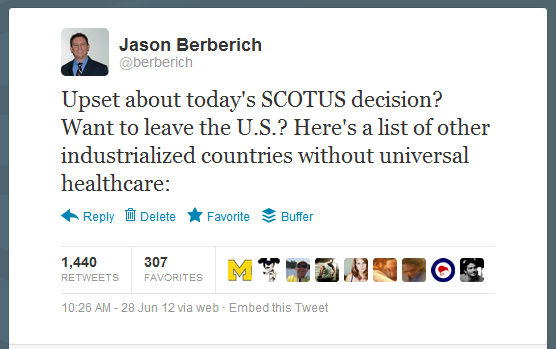 I thought it was clever, and was happy to see it favorited and retweeted by several of my followers within a few minutes. I was unprepared for what happened after that. Soon, my iPhone screen was constantly on with a steady stream of people retweeting and favoriting it. When I went home for lunch, I had to plug my phone in to recharge it because the battery was getting drained from the constant notifications.

Still in disbelief, I found myself constantly checking Favstar to watch the counts continue to climb. By the time I got back to the office, my tweet had 500 retweets. By 8pm, it had 1,000. As I’m typing this, the count is at 1,450.

Not surprisingly, I got a lot of replies by people who didn’t get the joke, and thought I had forgot my link to the list of countries. I even had a little fun interacting with a teenager who seemed completely clueless, and heard from a small business owner who claims the ACA will put him out of business.

It made for an interesting day. I’ve never interacted with so many different people in the 5.5 years I’ve been on Twitter. I’m also not expecting it to happen ever again.

A note about semantics

Even though my healthcare tweet was a joke, it’s important to me that it’s accurate. I considered my quick research to be “good enough”, but it’s worth pointing out that my 138 characters message contains two items that are open debate:

As best I could tell, there isn’t a single definition for what makes a country “industrialized” or “developed”. Economic criteria (e.g., GDP) are usually looked at, though human development is now often taken into consideration.

The International Monetary Fund classifies 35 nations as advanced economies, a listing that seems to the most current and representative one available. 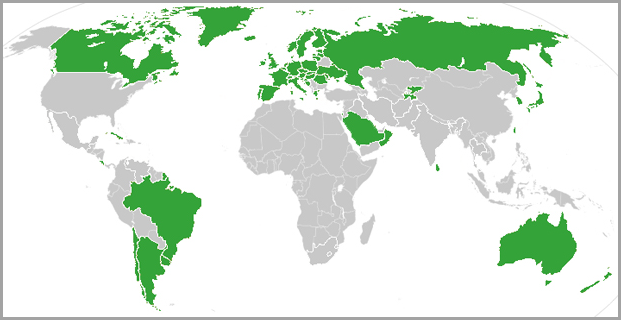 Getting past the word-parsing, the entire point is this: The United States is the wealthiest nation in the world, spends more on healthcare per capita than all but two countries2, yet unlike its peers, lacks universal healthcare. The ACA doesn’t get us there yet, but it’s a start.