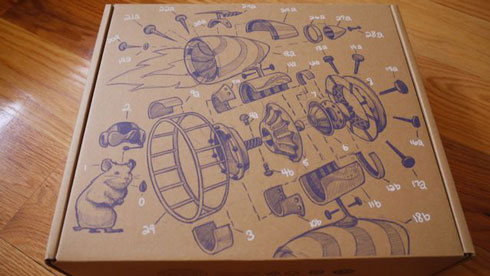 Below, I’ll give you a quick overview of the Cr-48 prototype notebook and of Chrome OS itself.
END_OF_DOCUMENT_TOKEN_TO_BE_REPLACED

Our family dropped our cable subscription last year, and I’d consider the change a success on most accounts. With just one or two reliable over-the-air channels available, our living room TV stayed quiet for months except for kids’ movies and PBS programs. Casey all but stopped watching TV except for the occasional disc from Netflix, and I continued watching the majority of my television on the 2-inch screen of my iPod Nano.

In March, our living room entertainment options expanded a bit when we began beta testing the Netflix streaming disc for our Nintendo Wii. The on-screen interface was minimal, requiring that almost everything be done from the browser on a Mac/PC, but it did allow us to watch shows and movies on-demand on a screen bigger than our 20-inch iMac. Picture quality wasn’t all that great, and we had a lot of buffering issues, but it was better than nothing.

When we moved into our new house a couple of months ago, Casey mentioned that she’d like to be able to watch something while nursing our infant, and for the inevitably long winter nights that we have here in North Dakota. After looking at a few different options, we decided to try the new Roku XDS. The Roku is a streaming-only device, gettings its content from various sources online instead of storing it locally on a drive.

END_OF_DOCUMENT_TOKEN_TO_BE_REPLACED

So, two big things happened in the last month: The Berberichs Moved Into a New House Fourteen months after selling our house in Thompson, Casey and I signed the mortgage…

I’m a longtime Gmail user, but between my BlackBerry and the fact that I don’t get a ton of personal email, I’ve never spent a lot of time working in its web interface. That changed recently when I began piloting Google Apps Premier Edition for me and a couple of other colleague at work – a process I hope to write more about in a future post. But for now, I want to talk about the increase in productivity I’ve seen in the short time I’ve been using Gmail for work, as well as a promising new feature being rolled out today called Priority Inbox.

END_OF_DOCUMENT_TOKEN_TO_BE_REPLACED

I like to periodically take inventory of the hardware, software, and web-based tools I use on a daily basis and share the results. Because if a few of you find something new and useful as a result, it’ll be worth the write-up. Now, onto the list.

END_OF_DOCUMENT_TOKEN_TO_BE_REPLACED

Amazon’s announcement last night’s of the latest and greatest version of the Kindle brings back a bunch of conflicting feelings in me. Part of me is tempted by the promises of a limitless catalog and the ability to carry thousands of books with me, while a larger part of me is perfectly content to hang onto my dead trees.

END_OF_DOCUMENT_TOKEN_TO_BE_REPLACED

I've been using a Lenovo ThinkPad T61 Widescreen as my primary work computer for going on 2.5 years, and I've been very happy with it. It's no Macbook Pro, but…

Continue Reading My Impressions on Windows 7

As much confidence as we have in the story we’re telling, we are also comfortable saying, “But what do we know?” This is our best version of the story of Lost, and it’s the definitive one. The worst thing we could ever do is not end it, or go with some bullshitty ending like a snowglobe or a cut to black. That was genius on The Sopranos, but The Sopranos isn’t a mystery show. For us, we owe our best version of a resolution here.

I was a latecomer to Lost, having waited several years to start watching the first season on DVD. I continued watching the series with interest (but also with a lack of urgency) until a couple of weeks before the final season started in February. Then, determined to get caught-up, I embarked on a two-season, 31-episode, viewing marathon that allowed me to experience the closing chapter of Lost alongside millions of other viewers.

Needless to say, I love this show. With its mixture of fantasy, religion, philosophy, science fiction, action, and character-driven stories, it is unmatched by anything else on television – past or present. And unlike most other television series, the creators of Lost were able to fully tell – and end – the story they envisioned.

And that’s what I want to talk about here. Not the show’s flaws – there are plenty – but how producers Damon Lindelof and Carlton Cuse chose to end things. Or not end things, depending on your opinion.

END_OF_DOCUMENT_TOKEN_TO_BE_REPLACED

It seems that the city of Grand Forks has succeeded in placing itself at the center of the unmanned aircraft business. This is great news for the region's economy. MPR:…