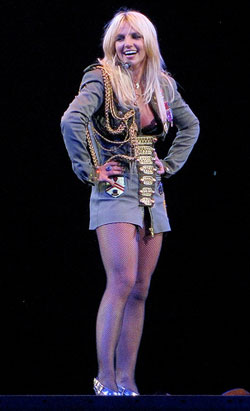 Last Saturday night Casey and I attended the Britney Spears Circus tour at its stop in Grand Forks. It was quite the experience, and easily one of the city’s biggest events of the year. I’m glad we were able to see Britney once, but I don’t think I’d go again if she came back to town in the future.

As the countdown hit zero and the giant video screens wrapping the center stage lit-up, it was clear what we were about to see: Not a concert, but a show. And looking at it from that perspective, it was pretty good. It was a spectacle in every way, with its dancers, circus performers, the audio/visual experience, and, of course Britney herself. In many ways, it reminded us of the Cirque du Soeil Delirium show we in Grand Forks three years ago, though not nearly as ambitious.

And though Britney’s music was always playing, it wasn’t the focus of the show – it was the backdrop that drove the her and the other performers. In contrast, we saw Green Day in concert just two months ago, where the band’s music was front and center for two straight hours.

So, I think that sums-up the Britney Spears Circus experience:  It’s not really a concert, but a good – not great – music show. I don’t think the performances would ever stand-up on their own, but then again, I don’t think anyone is expecting them to. The event is all about Britney, and everyone knows it.

Come in with those expectations, and when the lights come up at the end, I think you’ll walk away satisfied with the show.