As I watch our country slip deeper and deeper into economic depression (yes – this is a depression, like it or not), I often wonder how bad it’s going to get, how things will look on the other side, what will finally get us to the other side, and what this all means in the long run.

Short answer: Like everyone else, I have no idea. 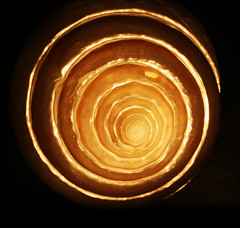 Our nation’s economy is in a death spiral. The collapse of housing prices led to the credit crisis, which stalled business and consumer spending, which led to higher savings rates and hundreds of thousands of layoffs, which led to more foreclosures, which led to even lower house prices and even deeper problems for banks. Continue, ad infinitum.

Because everything in the economy is interconnected, as one area gets worse, it has a negative cascading effect on everything it touches. The two problems here are:

Not only do our economic problems feed on each other, they also strain and highlight weaknesses in other sectors of our system. Income and spending are down across the board, leading to lower federal and state tax revenues, while the dramatic drop in home prices is affecting schools and local governments depending on property taxes. Medical costs continue to soar, while hundreds of thousands of Americans lose their health insurance, which in turn puts a big financial strain on hospitals that typically bill less for patients paying out-of-pocket. And we can’t forget about the millions of Baby Boomers just about to hit retirement age and start collecting Social Security benefits, while there’s a good chance their private investments are worth a fraction of what they were just last year or that their pension plan is insolvent from making the same bad investments most other financial institutions got caught up in.

There’s No Going Back

There are two major things that would help to stop our downward economic spiral:

Seems simple enough, right? Unfortunately, propping up either of these would be extremely shortsighted. Consumer debt and house prices were completely detached from reality for the last 10+ years, and attempting to return to that level of consumption and mania would be delusional. People now realize their wealth created with the “your house is an investment” mantra was completely imaginary, and now the pendulum has swung in the opposite direction toward saving and frugality.

This leads directly into the banking crisis. Most banks are still holding onto their toxic assets, publicly stating that housing prices will rebound and that these troubled mortgages really won’t look so bad given enough time. Like I said above, this line of thinking is delusional. The thing is, I don’t really think banks expect prices to return to their peak-bubble levels anytime soon. They just don’t want to admit reality: They are insolvent.

If banks were required to mark down mortgages to actual market prices (which, according to some economists, still have a long way to go before bottoming out), they would realize huge loses. For nearly 1,000 banks it would mean that their liabilities overwhelm their combined assets and capital – the very definition of insolvent. This is why they are hoarding bail-out money and refusing to lend it.

Last weekend, This American Life teamed up with the guys from NPR’s Planet Money blog/podcast for another great show, titled Bad Bank. The episode provides one of the clearest explanations of the banking crisis that I’ve heard so far. Go ahead and give it a listen.

Note: This episode’s MP3 file is no longer linkable. You can listen to the episode on its archive page.

As they lay out in the episode, your approach to solving the banking problem depends on whether or not you believe housing prices are going to rebound. If you do, you’ll probably side with the banks and favor a “bad bank” program where the government and/or private investors buy-up toxic assets to get them off bank balance sheets. But if you’re like me and you don’t think housing prices are coming back anytime soon, you’re left with the option of nationalization.

Now let me be perfectly clear: I hate the idea of the government owning and operating our country’s largest banks. It runs counter to my philosophy as a business person and seems to undercut the capitalistic core of our nation. That said, WHO CARES. Yes, it’s big government. Yes, it leaves a bad taste in your mouth. It’s also what the United States has recommended to every other country facing a banking crisis and it seems to be the best way to get out of ours. Let’s not let our emotions get in the way of what we need to do.

The more I read and learn about the U.S. and global economies, the more pessimistic I become. It seems that most of our leaders don’t have the political stomach to do what needs to be done (I’m looking at you, Tim Geithner). And while the stimulus plan and other efforts are better than none at all and will be useful in the long run, I don’t think they’ll prevent our economy from eroding for several more years. Think “L-shaped” recovery, not “U” or “V” shaped.

Things get even more troubling when you look at the economies of countries around the globe. British and European banks are somehow in worse trouble than their American counterparts, developing countries are getting pounded by the global drop in demand for manufactured goods, and third world nations dependent on government aid are seeing it disappear as the first world licks its own wounds. There’s a lot of unrest out there, and the crumbling economy seems like a powder keg waiting to explode.

As I said before, I expect it’ll be a few years before we return to economic growth. Once we’re on the other end, I can’t imagine things returning to how they were BEFORE the depression – they simply can’t. People are already spending less and saving more. More people will rent instead of buy, and those who do pay a mortgage will see their house for what it really is: shelter, not an investment.

And after the imaginary wealth of the financial industry completely evaporates, maybe we’ll get back to actually making things instead of building new ponzi schemes. This is the perfect time to create a new industry, and alternative energy would be a perfect fit.

This crisis would be a terrible thing to waste.

One reply on “Cascading Failure”

I have not read everything on your site yet, but so far what I have read seems to be based in wisdom and clear thought. I will keep reading. I particularly liked the article on decentralization. I think, as a nation, the US has become to dependent…on everything. We are too dependent on government to solve our problems. We are too dependent on big businesses to give us everything we want, at cheaper prices, and at one-stop, convenient locations (Wal-Mart).
This country was built on individuals focused on family and community, then country, not “global” or some unattainable socialist ideals.
Thank you
Phil