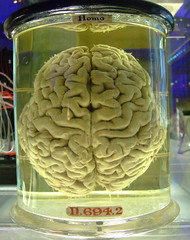 If you’re thinking about making life changes in the new year, you’re not alone. Something like 40-50% of Americans make a new year’s resolution, though by Valentine’s Day about 80% of those people have already given up on their goal.

Why do most people fail? A couple of big reasons come to mind:

So what can you do to improve the odds that you’ll succeed? Take advantage of how your brain is wired. Behavior science and human psychology provide many opportunities for “mind hacks” that make success more likely. You’ll find a short list below. Some might work better for you than others, so experiment and see what happens.

According to research, bigger, more radical changes are often easier for us than small, incremental ones. In a 2005 Fast Company magazine article titled Change or Die, Dr. Dean Ornish says that

people who make moderate changes in their diets get the worst of both worlds: They feel deprived and hungry because they aren’t eating everything they want, but they aren’t making big enough changes to quickly see an improvement in how they feel, or in measurements such as weight, blood pressure, and cholesterol.

So, set a goal that’s big enough to make a difference, but be realistic at the same time. A promise to workout one day a week and a promise to workout every day will both leave you frustrated. You should be able to see noticeable progress quickly while not getting overwhelmed or discouraged by an unreachable goal.

Whether we want to admit it or not, we base many of our decisions on mental “frames” instead of fact. These frames unconsciously shape our view of the world and color how we process new information. By reframing a problem or life change, you just might be able to make it more acceptable to your brain.

Doctors have had seen more long-term success with heart attack patients by reframing the traditional, negative “fear of dying” tactic of encouraging life change with a more positive “joy of living” one. Instead of looking back at your pre-change life in regret, consider it a “divorce” from your former life – one you can look back on while moving on.

Similar to reframing, you might want to try acting like the person you are trying to become. If you visualize the successful you as someone who skips the junk food and loves to jog during your lunch break, you’ll probably start acting like that person a lot sooner.

Have Someone Else Set a Deadline

If you have a goal where setting a deadline makes sense, you’ll be more likely to meet it if someone else sets the date for you. Generally, we’re better at sticking to an imposed deadline than if we set one ourselves. Of course, setting one period is better than non at all.

Put Something at Stake Upfront

Most people are loss averse – In general we strongly prefer avoiding losses than making gains. Some studies even suggest that losses are twice as powerful psychologically as gains.

Instead of giving yourself a reward upon completion of your big goal, you can use this behavioral tendency to your advantage by instead putting something at stake upfront. The threat of losing $100 is usually a bigger motivator than the prospect of gaining the same amount.

Find a Buddy With a Similar Goal

Having one or more people around you with a similar goal will remind you that it’s not you versus the world. You’ll have someone to share your successes (and your failures) with, and the friendly competition will create positive peer-pressure for both of you.

Even if you don’t know anyone in “the real world” who can be your goal-buddy, you’ll certainly find a group of like-minded people online who can give you support. There are dozens of web communities for every conceivable life change, so you’re sure to find one where you’ll fit right in.

If you find yourself buying junk food at the gas station when you fill up, avoid going inside the store all together by paying at the pump. At the grocery store, avoid strolling down the snack isles. If you’re finding it difficult to exercise consistently, set a schedule. Make it your default activity for that time of day, etc.

You can take this idea of making it easier to succeed as far as you want to. If you find yourself avoiding the gym, start chipping away at all of your excuses. Keep a bag of workout clothes in the car (or better yet, in a locker at the gym). If you find yourself getting bored on the treadmill, watch a TV show or movie if possible, or listen to an audio book or podcast.

Measuring progress toward your goal is important for keeping up motivation by seeing tangible results. There’s another very good reason to do this, however.

A psychological phenomenon called reactivity shows that the simple act of observation results in a change in behavior or performance. I’ve noticed this personally in tracking what I eat. I used a website called Gyminee to make this easier, and by becoming totally aware of everything I’m putting in my mouth, it’s impossible not to eat less and make better choices.

Make Progress, One Choice at a Time

Finally, while you may have a long-term goal to stop smoking, lose 25 pounds, or spend within your means, realize that your success is the accumulation of every choice you make. Every time you choose to exercise instead of sitting on the couch, every piece of fruit you eat instead of a candy bar, and every dollar you decide not to spend on meaningless crap is one small step toward your goal.

Deciding to make a change is awesome, but it’s also just the first and easiest step in the process. I wish you the best, and hope you find techniques that work for you!