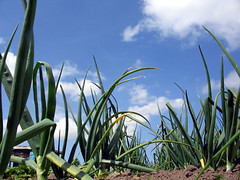 More and more, I’m beginning to think that our success as a nation – and as a species on this planet – depends on us looking back to our ancestors for wisdom and insight for survival. And, I think that will lead us to one overarching theme: Decentralization.

As the human race became more modern and industrialized, it optimized almost every for low cost by pursuing “economies of scale”. Which means, in a nutshell, that it makes more economical sense for a small number of large firms to produce something than for lots of small ones to pursue the same goal. The market seems to have this embedded as a form of Darwinian survival of the fittest – weak, poor performing companies fail, while the successful ones grow until there is either a natural monopoly or, more likely, an oligopoly.

You can observe this in practically every industry. It’s why we have Microsoft, the Big Three automakers, and Walmart. It’s also why we now have an infinite number of niches that monopolized by an infinite number of businesses. Anyone for high-end discount (Target), organic groceries (Whole Foods), or technology books with cute animals on their covers (O’Reilly Media)?

One of the problems with concentrating too much market power in the hands of a few companies is one we witnesses just a few months ago with American banks- the Too Big to Fail phenomenon. Which actually means, as we’ve seen, that these huge corporations are not so big that they can’t fail, but that they’re too big for us to let fail. Hindsight now tells us that we shouldn’t blindly trust the market leaders of any industry, be it banking, automotive, retail, food, or energy. In other words, no business should be too big to fail.

Other, different examples of the perils of centralized power can be seen in the energy and food industries. Sure, it costs less to produce both of these in a few big spots (power plants, feed lots, etc.), but it creates plenty of problems too. Fewer, bigger power plants increase the chances of a catastrophic outage that affects large numbers of people and larger feed lots, slaughterhouses, and food plants exponentially increase the chance that food-born disease is spread to lots of customers in a large geographic area.

Less obvious are the transportation costs. Moving large amounts of grain and livestock hundreds or thousands of miles isn’t cheap, nor is shipping back the processed meats, breakfast cereal, or produce. Same goes for electricity. More energy output is required to transport it over longer distances, since resistance gradually reduces the available power.

To me, this all points to a move back toward decentralization. More, smaller power plants closer to consumers – including at the building level itself with solar, wind, geothermal, cogeneration, and other power generation technologies. For food, it could mean the return of small farms that grow a variety of livestock and crops, a flourishing local market, and possibly a vegetable garden in everyone’s backyard. It could also mean the return of machine shops and a real manufacturing industry in the USA.

Decentralization isn’t necessarily the low cost way to organize a system, but what it lacks in monetary savings it makes up in flexibility and the ability to survive a catastrophic failure. Taking Google’s various services as an example, it hosts everything on multiple server farms, each containing hundreds or thousands of individual servers. One or a dozen servers can (and sometimes do) fail at any given time, but because their system is so widely distributed and redundant, it doesn’t matter. Failure is isolated, and the damage (if any) is limited.

So, in the future, we might need to start becoming generalists again out of necessity. The days of just accountant will be gone, replaced by accountant, farmer, energy producer, and more. In other words, the Maker/DIYer will be King.