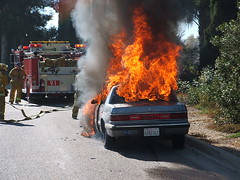 Update on Nov 18 @ 9:30am: Jonathan Cohn at The New Republic makes a good case for an auto bailout with conditions. Without one, Chapter 7 (liquidation) might be Detroit’s only other option.

I’m deeply torn about what our government should do about GM, Ford, and Chrysler – a fact that doesn’t sit well with my Conservative sensibilities. I’m a big believer in creative destruction and Darwinian-style survival of the fittest when it comes to business, and it does seem that the American automakers simply cannot compete with Japanese (and now Korean) car makers. Still, I foresee VERY BAD THINGS if these companies are allowed to fail.

Point: U.S. Automakers Have Been Dying for Decades. End the Misery Now.

Spending billions on Big Auto now will only delay their inevitable bankruptcy. Let them fail and then restructure under Chapter 11 to rid itself of the monkeys on its back.

Ford, GM, and the privately held Chrysler are stuck in a very bad place. They are victims of brainless management who couldn’t innovate their way out of a box. At the same time, these companies are tied down by union labor costs and obscene legacy obligations (pensions and retiree health care) that put it at a severe handicap compared to foreign automakers. This, in turn, forced them into decisions which have further lead to their decline, as Megan McArdle so excellently put it:

Management has made a lot of mistakes. But making big cars wasn’t one of them. That’s because they couldn’t profitably make small cars in the United States. And the reason they couldn’t is that their labor costs were too high. All in, Detroit was paying about $30 more an hour than other companies to make cars. At that kind of differential, you have to concentrate on large cars with big profit margins, not economy cars where consumers fight to save $15 on the headlight bezels.

So, to sum up this argument: Let Detroit implode. They’ll restructure and continue to make cars, and someday they’ll be stronger and more competitive than ever.

The rust belt states already have some of the highest unemployment rates in the country. The three American automakers directly employee over a million people. Factor in part suppliers, car dealers, and other related jobs, and something in the neighborhood of three to seven million jobs. Given, not all of those jobs are in Michigan, Ohio, and Indiana, but the bulk of them are, and a sudden loss would accelerate the death spiral in those states.

Also, a bankrupt automaker would find itself facing a very skeptical market. Unless there are some very explicit guarantees put in place, customers are going to think long and hard about buying a $20k+ vehicle when there’s a good chance its maker won’t be around to honor the warranty and provide parts and service. From a New York Times article today (emphasis is mine):

A study of 6,000 consumers last summer by CNW Marketing found that 80 percent of them said they would switch companies if G.M. or Ford filed for bankruptcy protection in the United States, suggesting that only G.M. loyalists would stand by the automaker.

If our economy weren’t already in crisis, I’d be inclined to let the Detroit automakers declare bankruptcy, rid itself of its baggage, and come back leaner and more competitive. But given that this is not our reality, I think some sort of infusion of bailout money is necessary. I believe it would be a huge mistake to give them a blank check without any oversight or restrictions (see also, the Wall Street bailout).

This week Thomas Friedman proposed what I think is a responsible and pragmatic model for a Detroit rescue plan. From Paul Ingrassia, he takes the following suggestions:

In return for any direct government aid, the board and the management should go. Shareholders should lose their paltry remaining equity. And a government-appointed receiver — someone hard-nosed and nonpolitical — should have broad power to revamp GM with a viable business plan and return it to a private operation as soon as possible. That will mean tearing up existing contracts with unions, dealers and suppliers, closing some operations and selling others, and downsizing the company. After all that, the company can float new shares, with taxpayers getting some of the benefits. The same basic rules should apply to Ford and Chrysler.

Friedman also adds one other qualification:

Any car company that gets taxpayer money must demonstrate a plan for transforming every vehicle in its fleet to a hybrid-electric engine with flex-fuel capability, so its entire fleet can also run on next generation cellulosic ethanol.

Separately, former CEO and Vermont Transportation Secretary Tom Evslin made a novel suggestion that makes so much sense there’s no way it would ever be implemented:

The US government should order a complete replacement for its vehicle fleet to be delivered over the next four years. The new vehicles must be either plugin electric hybrid, pure electric, or possibly natural gas. Obviously retooling both at the manufacturers and suppliers is required to deliver this order so the government should be willing to prepay a significant part of it as it does for new weapons systems. That gets money into the system fast and creates/saves jobs almost immediately. It lets the suppliers retool as well as the final assemblers.

Sadly, I don’t have any hope that meaningful concessions will be demanded of the American automakers, or that the bailout will be a integral component of a comprehensive national energy/infrastructure project. Instead, it’s probably going to look exactly like the bank bailout and be exactly as effective. Which is to say, it won’t be.

One reply on “What To Do About Detroit?”

What is a New Yorker commenting on the auto industry when they have nothing but run amuck with peoples’ money through poor loaning habits and bad investments. If the people were getting ripped off it has been with the banking,
Wall street and the list goes on.If you think that auto workers make to much I think the you should look in your own back yard.