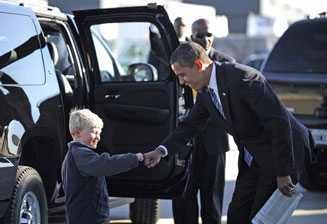 You may have sworn off politics for awhile after the extremely long election cycle that just ended, and I wouldn’t blame you if you did. If you do have any interest left in the subject though, I highly recommend setting aside some time to read through Newsweek’s epic seven part series, titled Secrets of the 2008 Campaign.

The parts about the Clinton and McCain campaigns were interesting, but I was continually struck by Obama’s evenness and discipline. His campaign reflected his refusal to dwell on the media flare-up of the day or engage in short-term tactics that would undermine long-term goals. And when it was appropriate, he engaged and embraced instead of ignoring and minimizing. From chapter 3 of the Newsweek article on addressing the Reverend Wright controversy:

Wright’s rants needed to be answered. But how? There was no great internal debate within Obama’s staff, in part because no one really knew what to do. But Obama did. Although, back in November, he had breezily told Donna Brazile and her “Colored Girls” group that he would not bring up race, in fact his own search for his racial identity was central to his being, and he knew that sooner or later he might have to broach the subject with voters. For several months, he had been thinking about giving a broader speech on the subject of race, and now the moment had arrived. Obama had his own sense of timing and purpose. He knew that Wright’s remarks could stir racial fears that could become a cancer on the campaign unless some steps were taken to cut it out, and that he was the only one skillful enough to attempt the operation.

I am also impressed by how self-ware Obama is – how well he knows himself:

In late May 2007, he had stumbled through a couple of early debates and was feeling uncertain about what he called his “uneven” performance. “Part of it is psychological,” he told his aides. “I’m still wrapping my head around doing this in a way that I think the other candidates just aren’t. There’s a certain ambivalence in my character that I like about myself. It’s part of what makes me a good writer, you know? It’s not necessarily useful in a presidential campaign.”

I’m almost finished listening to the audio version of Barack Obama’s first book, Dreams from My Father, and will say without hesitation that he is an amazing writer. Written before he began his political career in Illinois, Dreams is honest and revealing in a way that a sitting or retired politician could never be . And listening to him tell the story of his childhood and the search for himself through the lens of his recent Presidential victory is a unique experience.

Since winning the election just two weeks ago, it has become increasingly clear that, despite the claims of his harshest critics, Barack Obama is a political pragmatist. He holds a liberal philosophy, sure, but his political history – and now his cabinet and staff picks for his administration – show that he’s more interested in getting stuff done instead of fighting political battles and clinging to an ideology. See also: Joe Lieberman.

Earlier this year Obama brought up the possibility of a Team of Rivals cabinet, and it appears that he’s pursuing that strategy right now with Hillary Clinton as Secretary of State and the possibility of several Republicans on his team too.

Most recently in his 60 Minutes interview this week, Obama talked of a similarly pragmatic approach to addressing our country’s economic crisis (emphasis mine):

Two points I’d make on this. Number one, although there are some parallels to the problems that we’re seeing now and what we say back in the ’30s, no period is exactly the same. For us to simply recreate what existed back in the ’30s in the 21st century, I think would be missing the boat. We’ve gotta come up with solutions that are true to our times and true to this moment. And that’s gonna be our job. I think the basic principle that government has a role to play in kick starting an economy that has ground to a halt is sound. I think our basic principle that this is a free market system and that that has worked for us, that it creates innovation and risk taking, I think that’s a principle that we’ve gotta hold to as well. But what I don’t wanna do is get bottled up in a lot of ideology and is this conservative or liberal. My interest is finding something that works. And whether it’s coming from FDR or it’s coming from Ronald Reagan, if the idea is right for the times then we’re gonna apply it. And things that don’t work we’re gonna get rid of.

It’s possible I’m being a little too optimistic with my thoughts here. Maybe Barack Obama will reveal the socialist/communist beliefs that some suggest he holds, and we’ll soon be nationalizing banks and insurance companies and giving away money to Wall Street and Detroit automakers. What’s that? That’s already happening?

So anyway, I’m cautiously optimistic about the incoming administration. I know there will be mistakes and disappointments, but Obama seems to be working toward a good start.