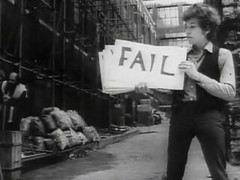 If there were any doubts, this week should confirm the fact that our country is in deep $#!&. We were (are?) closer to a complete collapse of the U.S. financial system than most people will ever realize, and that’s just one of a number of crises that are boiling up:

So our country is facing all of the immediate and long-term problems listed above (along with some others), while our law and policy makers are twiddling their thumbs. Neither major party has done anything of substance to actually fix these problems. Instead, they’re engaging in every sort of short-term pandering opportunity that gives the appearance of progress (“drill, baby, drill!!”) while punting the fallout for some future generation to deal with.

Our people and our government are in debt, we’ve based our economy on a fossil fuel with a finite supply, we can’t take care of our most vulnerable citizens, and we’re soon going to be eclipsed as a world power by China. So, seriously, I’m asking: What are we going to do about it?

One reply on “What Are We Going To Do About It?”

In short, mostly nothing…it’s what were good at now-a-days.