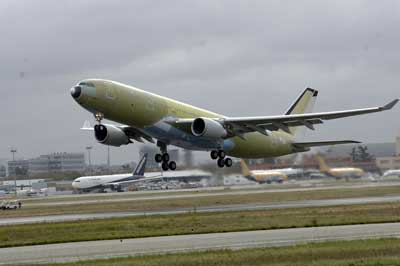 Anytime a politician latches onto an issue they believe is politically valuable to them, you can be sure that the concepts of common sense and reason lose all meaning. The latest example: Politicians trying to overturn Northrop Grumman’s $40 billion contract to produce the next-generation Air Force supertanker.

This controversy erupted exactly a month ago when the Air Force announced that Northrop Grumman and its partner, the European consortium EADS, had beaten out Boeing for the contract to produce the next fleet of mid-air refueling tankers. The outrage was immediate, and predictable:

“We are outraged that this decision taps European Airbus and its foreign workers to provide a tanker to our American military,” the Washington State delegation said in a joint statement. Boeing planes are assembled outside of Seattle. “This is a blow to the American aerospace industry, American workers and America’s men and women in uniform,” the statement added.

This is a blow to Boeing, for sure, but the rest is simply not true. The Northrop KC-45 is not only less expensive than Boeing’s KC-767, it offers greater fuel capacity and lower risk. A prototype KC-45 has already been built and tested by Northrop using their own cash, while the Boeing tanker is/was just a plan on a paper, having never been flown, tested, or certified. The KC-45 is a better deal for the Air Force, and for American taxpayers.

In addition to losing the contract on its merits, Boeing has an extremely weak case in saying that their plane is “American” while the Northrop/EADS tanker is “foreign”:

Pandering politicians will continue to shout “buy American,” but the rest of us need to figure how to oversee and regulate the global economy in which both Boeing and Airbus are global, not American, players. And if Boeing wants Pentagon contracts, it should stop playing the patriot card and start making better products.

Boeing is, predictably, filing a protest with the Government Accountability Office over the outcome of the contract award. The company says the contract process was “seriously flawed”, though it made no complaints until it was announced that they lost the bid. For its part, Northrop is conducting its own public relations campaign to get out its side of the story. The company’s CEO was on NPR this morning, correcting misinformation and discussing the deal and :

Now at the end of the day, the Congress has to consider all of the facts, and if the Congress wishes to overturn this decision, that’s something they can certainly consider doing – they can cut off funding. I will tell you though, as far as I know, it will be unprecedented in our history, and the process of doing it would have very significant ramifications for the work of all of our allies, and would have a fundamental problem potentially undermining the entire acquisition process.

People need to wake up to the fact that these corporations are international institutions, and that labeling some “American” and others foreign (or even worse, French) is over simplifying the situation. If you could follow the supply chain for almost any type of manufactured product, you’d find a complex web of partnerships and suppliers across the globe. People may not like it, but it’s a fact they need to wake up to if our country wants to complete the adjustment to a global economy.

One reply on “Boeing and Politicians: Make the Air Force Buy Our Crappy Overpriced Tankers”