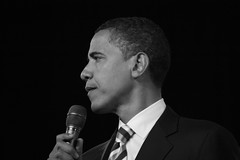 Things are pretty exciting here in Grand Forks right now. Several weeks ago we found out that Senator Barack Obama will be speaking at the North Dakota Democratic Convention on April 4th. Then we found out yesterday that Hillary Clinton was feeling left out, and decided to make an appearance later that night.

I can’t remember the last time we had a presidential candidate here in town, so having two show up the same day is a pretty big deal. We’re planning on attending the Obama event, though logistics with the kids will likely prevent us from hearing Senator Clinton. I’ve never been to a political event like this, so I’m excited for the in-person experience. I’m sure I’ll have something to say or show here afterwards!

On a side note, should Senator Obama lock-up the nomination and compete against McCain this fall, I think he has a really good shot at winning North Dakota. McCain had a weak performance in February’s caucus here, getting just one point more than Ron Paul. There’s a lot more excitement for Obama now, and there’s a good chance that’ll stick around until November.