Update (3/28/2008): Adobe has committed to updating the terms of service to remove the area of concern. Thanks for listening, Adobe:

We reviewed the terms in context of your comments – and we agree that it currently implies things we would never do with the content. Therefore, our legal team is making it a priority to post revised terms that are more appropriate for Photoshop Express users.

For anyone who would like to do some basic photo editing without needing to purchase and install Photoshop Elements or a similar program, you might want to take a look at the Photoshop Express, which Adobe just launched today. This is a free, web-based edition of Photoshop that will let you organize, retouch, edit, and share your pictures. 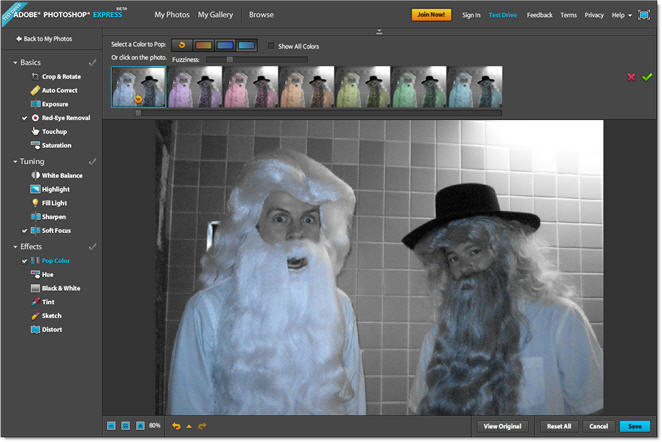 It’s probably not for everyone, and I haven’t had a chance to try it out myself yet, but if you’ve been looking for a free and easy way to edit and share your digital pictures, you might want to sign-up for a free account. This is one particular part of the terms of service agreement that you’ll want to be well aware of before uploading your photos to Photoshop Express (emphasis mine):

Adobe does not claim ownership of Your Content. However, with respect to Your Content that you submit or make available for inclusion on publicly accessible areas of the Services, you grant Adobe a worldwide, royalty-free, nonexclusive, perpetual, irrevocable, and fully sublicensable license to use, distribute, derive revenue or other remuneration from, reproduce, modify, adapt, publish, translate, publicly perform and publicly display such Content (in whole or in part) and to incorporate such Content into other Materials or works in any format or medium now known or later developed.

Lori Grunin at the Cnet Webware blog made that particular discovery. Basically, it means that if you choose to share your photos publicly via Photoshop Express, you give Adobe the right to use them for whatever purpose they choose, forever. As Lori suggests in her blog post, this might be intentional, or it may have been slipped in by some overzealous lawyers. If it gives you worry (it does for me), either hold off on using PS Express (they might revise the TOS) or simply don’t publicly share your photos via the web app’s publishing functionality. Use Flickr instead.