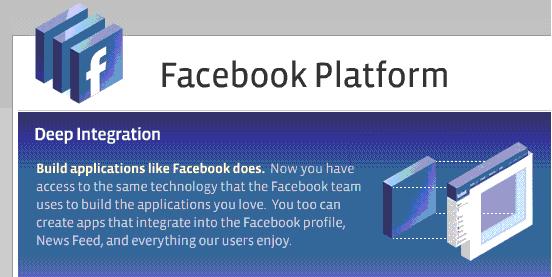 My Facebook lovefest continues. Late yesterday they announced the latest version of the Facebook Platform, which opens up the site (and its millions and millions of users) for 3rd parties to build on. If that doesn’t mean anything to you, just know this: It’s a very big deal.

TechCrunch calls Facebook the “Anti-MySpace”, and for good reason. MySpace gives users the appearance of openness by letting them make their pages look as crappy as they want, but does almost everything they can to prevent users from interacting with outside sites and services. For example, when it temporarily blocked Youtube videos back in 2005, and more recently, when it blocked Photobucket content before buying them a month later.

While Facebook doesn’t let users change the way pages look (one of its best features, in my opinion), it instead opens itself up to 3rd party developers with a really impressive API that’s got great documentation. Existing applications can now be integrated right into the platform so they look and feel like they’re part of the site, and entirely new apps and business ideas can (and will) be created to reach Facebook users.

I love how Zuckerberg is thinking long-term with Facebook. He could have easily sold the company and cashed out, or littered the site with tons of ads, but he didn’t. Instead, he’s building a platform that will make Facebook one of the most powerful (and money-making) sites for years to come. He’s doing everything right, as best I can tell. Pure genius.

Since Facebook/Twitter integration has already been done on the new platform (it’s one of the first 3rd party apps), next I’m hoping to see a Flickr application that will act as a drop-in replacement for the Facebook photo app. I’m sure someone is already working on it.

I’ve already got a few good Facebook app ideas in my head that could make a ton of cash if correctly executed. Of course, my lack of time will prevent me from starting anything, but that’s a different story…

It’s time for Face Book to Pay Up.

The End of the Plantation system.

I would like to help a bit in bringing about a new era on the Internet. We can call it web 3.0, or 2.5. I will leave the definition to others that are better at this kind of thing.

This will be the era of a true revolution in the power of site members. An era where members have the power and the ability to be rewarded monetarily for the value that they add and the revenues that are generated from their work and participation.

The recent announcements by Face Book that they are going to be the next OS, or the next platform, or the next goggle, reeks of egotism and self indulgence as well as a master slave mentality. In the bravado of the announcements that spewed forth from the reality distorted world of Face Book what was left out was the untold fact that Face Book would have little or no value if it were not for it’s 25 million members.

The hard fact and truth of the matter is that Face Book makes hundreds of millions of dollars off of the backs of its 25 million members and has no plans to share the true wealth (money) of the revenue they generate with them.

Does Mr.Zuckerberg or anyone at Face Book believe that they add more value to Face Book than the 25 million members ?

We now live in a technical age where a close to approximate monetary value can be assigned to the value and revenue that Facebook members add to the company. This fact can no longer be hidden, it can be found and it should be known by all of the members that generate the wealth and revenue.

Why cant we see a graph on Face Book that discloses to the members the amount of revenue that is generated from them in terms of revenue generating partnership deals and advertising ?

Why cant Facebook give an equitable portion of its ad revenue directly to its 25 million members ?

Of the revenue that Face Book generates, as a percentage how much is given back to its 25 million members in a monetary form ?

The advertising revenue that is generated by Face Book come from the actions of the 25 Million members, not the Face Book staff, so the members should receive the lions share of the revenue

As a group the 25 million members add value to the company and generate revenue, as a group they should own stock in proportion to the vaue that the add and the revenue that they generate.

How much is Microsoft paying Face book for the rights to serve ads to Face Book members? Since the value of the ad deal is probably based on the amount of members that face books has, it would make sense that the members should be given a share of the money that Microsoft has paid to Face Book for the rights to serve the ads. Mr Zuckerberg and the rest of the Face Book team should give the 25 million members the money they deserve for the value that they add to Face Book.

For a one billion dollar acquisition that is by and large based on membership size as well as advertising revenue generated by the members; it seems that giving each of the 25 million members 1 million dollars would be an almost equatable reward for their participation.

There is little difference between how Face Book treats its members and the share cropping schemes that were used to generate wealth for rich land owners on the backs of poor people and slaves. At least in the old share cropping schemes the works received a small portion of revenue, in the current situation members receive none of the revenue from the content that they create. Face Book and other sites that do not share the revenue and wealth that members create for them do not understand that the times have changed and the plantation game will no longer work. Now members have the ability to leave the plantation and to either create their own communities or to become members of communities that will pay them an equitable portion of the revenue and value that they create. This is one of the key revolutions of technology. There are no barriers to owning the means of production. Members are the means of productions, and are the value add. The pyramid that had members who are content creators and add value on the bottom has now been turned upside down. Unlike slaves that could not break free of the wealthy plantation owners bonds, members now have the ability to demand their equitable share and if they are not given it they can leave without retribution.

“Sharecropping typically involves a relatively richer owner of the land and a poorer agricultural worker or farmer; although the reverse relationship, in which a poor landlord leases out to a rich tenant[2] also exists. The typical form of sharecropping is generally seen as exploitative, particularly with large holdings of land where there is evident disparity of wealth between the parties.[attribution needed] It can have more than a passing similarity to serfdom or indenture, and it has therefore been seen as an issue of land reform in contexts such as the Mexican Revolution. (Sharecropping is distinguished from serfdom in that sharecroppers have freedom in their private lives and, at least in theory, freedom to leave the land; and distinguished from indenture in sharecroppers[][]entitlement to a share of production and, at least in theory, freedom to delegate the work to others.) Sharecropping is often described as a never ending cycle of debt.

Sharecropping agreements can however be made fairly,[attribution needed] as a form of tenant farming or sharefarming that has a variable rental payment, paid in arrears. There are three different types of contracts.

There are three different types of tenant farming. According to A. Alkalimat, renters who were to hire land for a fixed rental to be paid either in cash or its equivalent in crop values; share tenants, who furnish their own farm equipment and work animals and obtain use of land by agreeing to pay a fixed percent of the cash crop which they raise; share-croppers who have to have furnished to them not only the land but also farm tools and animals, fertilizer, and often even their own food, which they had to pay back with a larger percentage than shared tenants. Tenant farming was a way in which to keep African Americans and other poor groups under control but make them feel like they had some importance. Though many blacks participated in tenant farming they still were looked at and labeled as the lower class.

Because of the high rate of illiteracy among blacks at the time, they were often taken advantage of. Poor, illiterate and intimidated by post Civil War violence, many former slaves agreed to sharecropping contracts that were designed to keep them poor [PBS]. Eventually this exploitation led to violence. Courts would usually rule in favor of landowners when these incidents were brought to court.