On Saturday I had the opportunity to make a return trip to the Boot Camp For New Dads at Altru – this time as a “veteran dad”. Kael made the short trip to the hospital with me and was quite the little trooper through the 2 1/2 hour class. It was also apparently a boot camp first, with more returning dads and infants than soon-to-be fathers.

The Grand Forks Herald had a staff writer and photographer at the class, who put up a really good article about the daddy boot camp program in today’s edition. It’s called “Daddy boot camp“, and should be up for at least a little while until it goes behind the newspaper’s paid firewall.

I picked up a few copies of the paper version for Kael’s baby book and for the grandparents, and it turns out we made it onto the cover! Three months old, and our son is already getting media coverage! 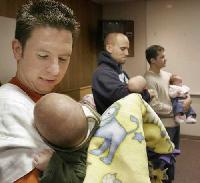