After almost four years with the same phone, the Kyocera QCP 3035, I finally got a new one last Thursday – the Motorola Razr V3C. Here they are, old and new, side by side: 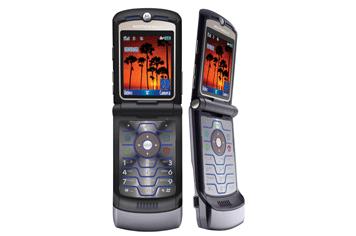 The photos are a little misleading – in reality, the size difference isn’t all that big. The Razr really is as thin as it looks though – about 1/2 inch when it’s closed and half that when it’s flipped open. It’s like a sexy little sports car compared to the tank that is the QCP 3035.

It’s a little funny that I ended up with the Razr as my phone. I wasn’t a fan of flip phones or Motorola ones. I always stuck to the candy bar brick phones, and really liked the fact that there was a little weight to them. Lately though, the Kyocera was showing its age with a very scratched up screen and a loose battery latch, both from a few too many drops to the floor. It didn’t take too many times before I was getting pretty tired of the battery randomly falling off when taking the phone out of my pocket.

Thankfully the Razr was just released for the Verizon network about a week or two ago. Part of me wanted to wait for the Treo 700w smartphone, but its release date is still uncertain and I didn’t want to spend $300-$500 it would cost when available. The Razr does almost everything I could want it to: Bluetooth, 1.3 megapixel camera, EVDO, MP3 playback, and more. Best of all, I was able to get it for one hundred bucks after rebates and my New Every Two discount. You can’t beat that!

A year ago, I was really down on Verizon for always being the last carrier to get popular phones. Thankfully, they’ve improved a lot in that area lately, highlighted by it getting the exclusive on the Treo 700w for a number of months. It’s good to see that they’re finally getting a bunch of new/high end phones to take advantage of their really good nationwide network. I’m also impressed by their customer service – I called to order my phone last Monday afternoon, and spent less than two minutes on hold. The man took my order and then had the phone in my hands just three days later. After a few minutes going through the automated activation, I was up and running. Very easy and simple – awesome work!