Recently, Casey and I have been attempting to set life goals – both as a couple and individually. I’ve found it to be a difficult exercise, but one that is very much worth doing. The process forces me to actually slow down and think about what is most important to me and what I want to accomplish in my lifetime. That’s definitely a Good Thing.

While we were beginning this process, I happened to come across a new site called 43 Things, created by The Robot Co-op with the help of the guys at 37signals. It was prerelease at the time, with a simple interface to input personal goals and see goals that others have entered. That’s pretty much about it, which was so cool about it (Getting the 37signals guys involved was smart on the part of the Robots – they are the masters of simple, intuitive design). 43 Things was also my introduction to the weighted list, a new method of displaying the popularity of list items by making changing their font sizes. In the case of 43 Things, the more popular a goal is (the more people add it to their list), the larger its font size. Example: 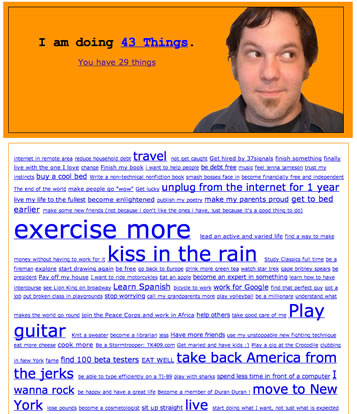 One January 1st, The Robot Co-op released the final version of 43 Things, and it’s pretty sweet. The drop dead simplicity of the prerelease site is somewhat missing, but it’s still very intuitive and easy to use. The new version emphasizes the social aspect, making it easy to view goals of specific individuals, create teams (not really sure what the point of this is yet), read comments from others who have already completed goals on your list, and create posts to your blog about your goals. This is all very cool stuff, and it will be fun to see how it evolves as more people find it and as the Robots add more features.